When you wake up and see this from your bedroom window, you know you did some good in a previous life. 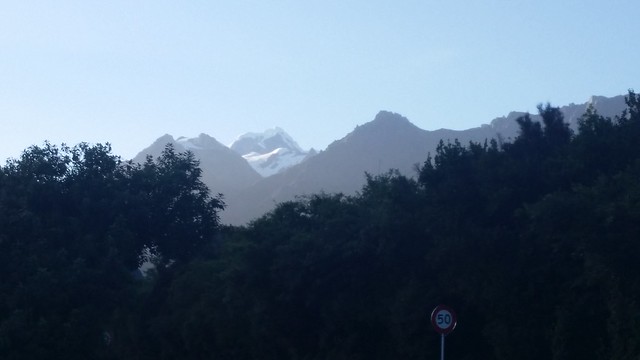 I got up early, showered and packed and headed out to get some breakfast. I decided to have breakfast in the restaurant where 12 hours earlier I had dined on pizza.

There were two intrepid Tour Aotearoa bikes parked outside the restaurant and I took a moment to examine one of the bikes. It had very fat wheels, and no gears whatsoever. It also had some sort of bag strapped to every steel tube on the frame, forks, seat post and handlebars. I got talking to the owner, who was from Alaska and told me, me with my 20 gears and only 8kgs of luggage, the same me that struggled up the hills the day previously, he said that gears really weren't that important, and as for weight, well it wasn't all about the weight. For some reason the owner of the restaurant thought we were all together, so put our meals on the same table. I felt like a fraud. With my pristine little carbon frame and road wheels, my palomino pony, trying to muck in with these tough cowboy types who have been riding the ranges on their trusty stallions and seen and done things that would cause me and my pony to cover our eyes and ears.

So after an awkward moment or two, when I fully expected one of said cowboys to carry my food to another table. We all sat down. I quickly realised that it would not do for me to try trading stories with these guys. Whatever I thought I'd done, ever, was insignificant compared to what these guys do each day. So I spent breakfast listening to their tales; the distances, the terrain, the weather, the sleep or lack-of.  During this time, several other members of this rugged clan turned up, paid their respects, sniggered at my bike and galloped off.

They were of course perfectly pleasant and welcoming and not at all condescending (to my face). I was to see these people several more times over the next few days. In fact I spend about an hour having lunch with two of them in a salmon farm restaurant at the half-way point of the day.

The ride to Haast is very pleasant. It seems to be mostly downhill until you reach the sea. Then it is flat. 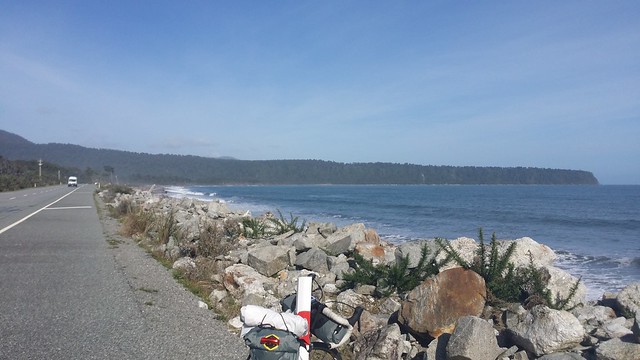 But there is a bump in the road after that, at a place called Knights Point. The road up to that is steep. 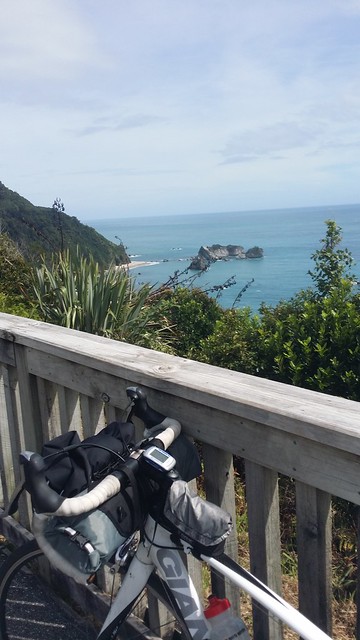 Knights point is the one place where the sandflies got me. I couldn't find my magic potion and so I didn't stop long. Or didn't want to stop long. But some couple of retirees, who probably saw themselves in me, wanted to chat about my trip. I did my best to make it sound impressive and hoped they would not meet any real bike travellers. Then I headed off. 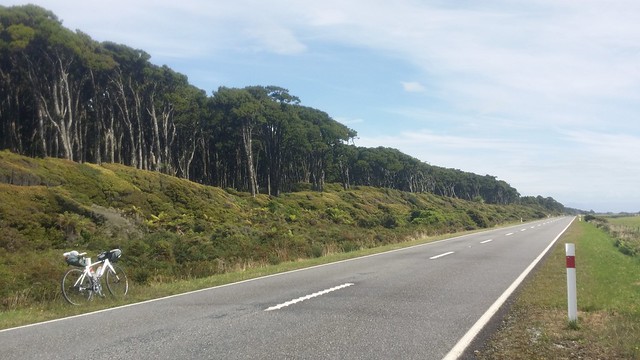 The road into Haast is long and straight and flat. The temperate rainforest pretty much comes down to the road and the road is next to the ocean. You've cycled nearly 120kms, but still can appreciate the beauty of the surroundings. 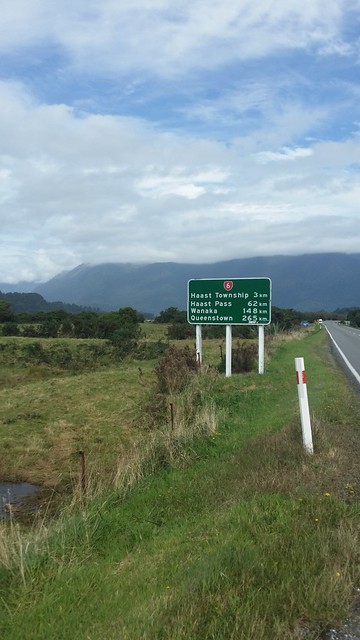 I checked in to the motel in Haast and found I was next door to the couple I met at Knights Point. They introduced me to their relatives, my neighbours on my other side, and they all treated me like a rockstar. Then I went for dinner and a pint at the Hard Antler. There I found the real rock stars, telling more tales of extreme adventures by bike.

Their general view was that there would be heavy rain in the morning, starting at 7am and finishing by about noon. My view was to have a lie-in, late breakfast and hope the weather had passed through earlier than anticipated. Their view was to start cycling at 4am. I guess that is why they are cycling 3,000kms and I'm doing about a quarter of that. We all said goodnight and I wished them well with the night time cycling.