It had rained all night, and the morning looked dark. I didn't want to cycle in the rain without some lights. This West coast road was the only one for anyone travelling any distance, so I could expect quite a bit of traffic.

Fortunately Hokitika has a pretty good cycle shop (they say the only one for 500 kms), and I bought a front and back light to make sure that everyone could see me from a distance. I stopped by the Clock Tower Cafe for breakfast and to read the instructions for the lights (yes I know, how difficult can it be?).  When I finished breakfast, I headed outside to fit the lights and got chatting to another cyclist while I was doing so. He sounded American and had a proper touring bike, with panniers and all kinds of ponchos and see through map pouches (yes a map would be useful).  We exchanged stories, and it wasn't long before he asked whether I'd met any of the people doing the 'Tour Aotearoa'. I hadn't heard of it, but from what this guy was saying, this was a serious expedition and our little efforts were puny in comparison.

Anyway, with my lights flashing I set off South for Hari Hari. This was only about 70kms away, and fairly flat cycling, but I wanted to break up this West coast a fair bit so that I could recover properly before the next day. I didn't need to be a hero, and wanted to enjoy myself. 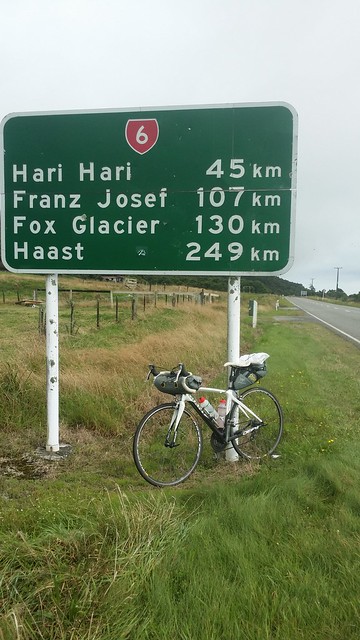 I was making reasonable time, but something was preying on my mind about my accommodation in Hari Hari. It was called the 'Wildside Lodge' and also called a Wilderness Retreat. I had booked it because it was the only place in town with any space, and it was not even in the town. It cost $120 NZD, so it was with a little surprise that I noted that at that price it did not come with electricity! So far on my trip, I was enjoying myself. I had quite short days cycling and then time in my accommodation to wash my clothes, make a meal or go out for a meal. I could recharge my phone, my bike computer and now my lights and I could get WiFi in even the most remote places, many of which didn't offer a phone signal. This 'retreat' was going to challenge me in a new way. Thats what I was worried about.

But I got on with cycling and it wasn't long before I caught up with some of these tough expedition cyclists who were well on their way to completing the Tour Aotearoa. They were on mountain bikes and had all kinds of bags attached. I was on a road bike, with a minimum of baggage. So I didn't need to be fast to catch them up. I was feeling a bit fed up with the rain and looking forward to getting out of it. But these people were almost oblivious to it. They noticed it of course, but it seemed to have zero impact upon their spirits or speed. I will write elsewhere about the inspiration I took from my time with these rugged travellers, this is more a tale of my journey.

Before long I pealed away from the tourers as I reached my home for the night. My host lived in a house with full electricity and probably plenty of other mod-cons, and she guided me through puddles and past farm outhouses to some sort of converted shed in the middle of a field. This was home sweet home for a while. To be fair, it looked lovely, even in the pouring rain. It had been lovingly built and cared for. In the summer it would be a lovely retreat, especially for a couple. But in the rain, in the half-light, on my own, travelling by bike; I confess my spirits dipped a little. 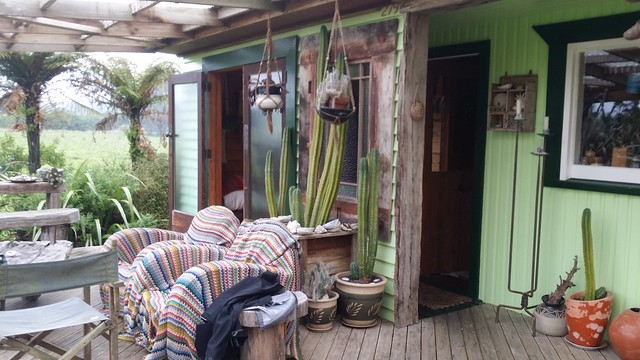 I had a guided tour and shown how to light a gas lamp, where the candles were and where the matches were. Finally I was shown the wood stove/water boiler, and given a lesson in how to use it. Then the lady who showed me around, lit it with a match, and said that the water would be warm enough for a shower in about 2 hours. Two hours! That is a fair while to wait when you are cold and wet and hungry. I wanted to ask why she didn't maybe do that match lighting thing a couple of hours ago and then re-enact it for my benefit after I arrived. But I kept quiet, just in case I was evicted. 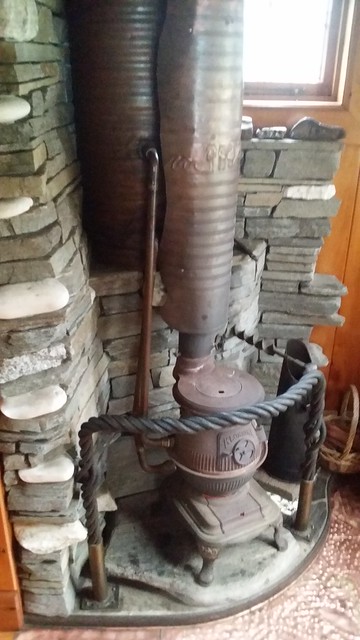 I did pile every last twig into that stove in an effort to make 2 hours into 15 minutes. But didn't really achieve my goal. It was going to get dark soon, so I quickly cycled the 2kms into Hari Hari proper, went to the only store there and bought a tin of soup, a pot noodle, a bar of chocolate and a bottle of wine. It cost me about $70 NZD, which would be a weekly shop elsewhere. 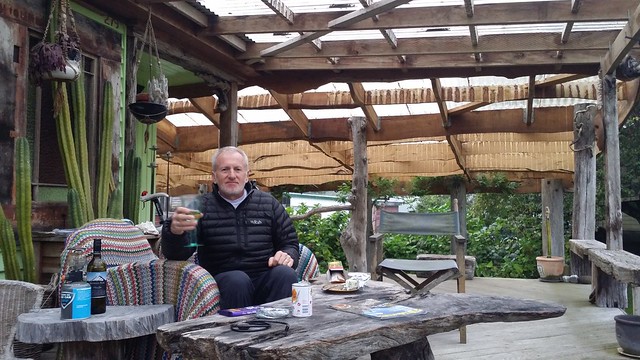 I cooked on the gas stove and sat outside eating and drinking until I judged the boiler had done it's job. Then I took a lukewarm shower, the warmest part of which was vigorously drying myself afterwards. I was pretty much ready for bed and thought I'd light the gas lamp so that I could read one of the many books on massage and spiritual healing. But alas the gas lamp didn't work, and I didn't have the will to make a fuss about it. So I lit a candle and didn't read. 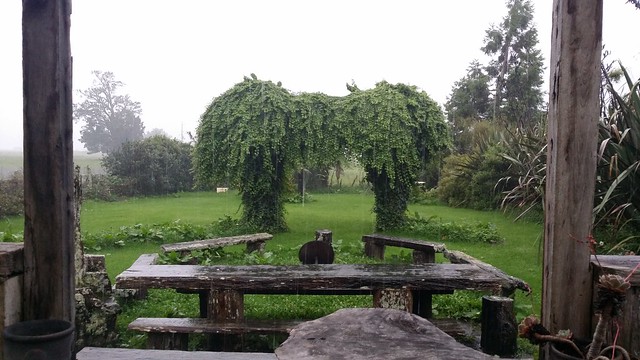