It is fitting that this is the first entry in this blog, as it was the trip that transformed my approach to cycling.

Originally planned at New Zealand Part 2 - South Island, after a successful cycle trip from Rotorua to Christchurch in 2015. The dates and numbers were confirmed in October 2015, but one by one people pulled out, until by mid-February 2016 the organiser called it off as the numbers (5) were not enough to carry the cost of hiring a support vehicle, trailer and driver.

Had it been called off in January I would have heaved a sigh of relief and got on with other things. It was too hot in Sydney during the day to train and I had been travelling for a month around Christmas, so I was well below my peak fitness and weight.

However, by mid-February I had been in the UK and training in the cold, and had also spent 3 days in Southern Spain training in the warmth. I was getting fit, and had already paid for the flights. But more than that I was motivated to try something that two UK friends had been doing, "Credit Card Cycle Touring". You carry all you need, but you don't camp and don't cook. So you can travel light.  You eat out and you stay in hotels, motels, B&Bs and backpackers.  These two friends Chris and Andy, had cycled from Land's End to John 'O' Groats in the UK over 7 days, and had more recently cycled the spine of the Pyrenees from the Atlantic to the Med. I had been talking to them and wanted to try it out.

So when the call came to say that the group trip was over, I decided that I would do the solo trip, unassisted. My wife said she couldn't see how I could do it all alone. Wouldn't I get lonely? I answered that there are plenty of people in New Zealand and I was sure I could meet someone to talk to.

My first job was to take a road cycling bike trip, where you carry a couple of water bottles, a few tools and a spare tube in your saddle bag, and some cereal bars in your jersey pockets, and transform that into something which was sustainable for 9 days. I needed clothing for different weather conditions and as well as something to wear whilst cycling, I needed something for the evenings.

I'm afraid to say that I did splash out a bit on clothing and on the bags to hold this extra gear. Here is what I took (as well as the bike!): 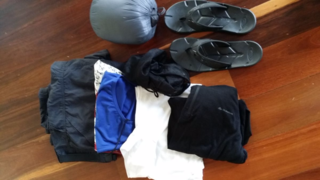 Gear for when not cycling 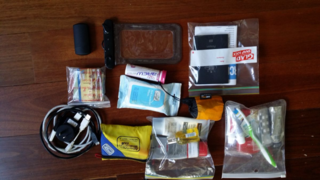 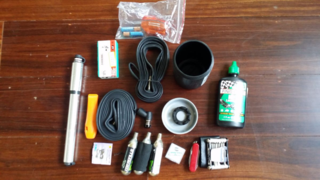 Equipment for the bike 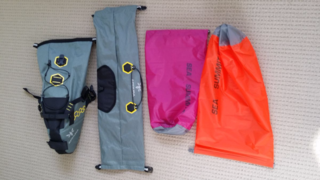 The bags to carry it all. 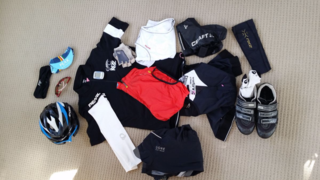 I did get a bit obsessive about the weight and the kitchen scales did not know what hit them. An example was that my UK friends suggested that I took SPD pedals and then mountain biking shoes which would be OK for wearing when not riding. But when I weighed the shoes and the cleats the weight was 100g higher than SPD SL pedals, road cycling shoes and flip-flops (thongs in Australia).

I was actually pleased with this justification for the second pair of footwear, as it is nice to have something else on your feet.

My one extravagence was a RAB microlight down jacket. March is one of those months where temperatures can vary a fair bit through the day in New Zealand. It is Autumn (Fall), and South Island is a long way South of Sydney, and I would be in the mountains for some of the time. It was always nice to put on the jacket, but there were only a few nights when it was needed. My best item in terms of utility and value for money was a Merino top from the Decathlon sporting supermarket in Sheffield, UK. That cost £23 ($45 AUD) and was a great item to wear for the evening, and in bed and if it got really cold, under my cycling jersey.

All told my bike weighed 8kgs, my packed gear weighed the same and I weighed about 72kgs. So less than 90kgs in total. I have friends who struggle to get their own body down to that weight, so figured that it wasn't going to be too hard to carry myself and my gear around New Zealand.

Starting from Christchurch, the route headed West on the flat terrain of the Canterbury plains and then climbed up the Southern Alps for the first crossing at Arthur's Pass. Then descending to the West Coast town of Hokitika. It then heads South until Haast. Then East up the Haast Pass, crossing the Southern Alps again, before heading across to Wanaka. Finally traversing the Crown Ranges to reach Queenstown.

Logistics and a last minute injury

The original organiser of our trip had planned out each day and organised accommodation for all of us. So my first thought was to just follow his planning. But then I looked at the first couple of days and saw that I would have half a day in Christchurch after arriving, following by about 135kms the following day to reach Bealey, just below Arthur's Pass. There was also a day off at Fox Glacier, but long days either side. I didn't need to push myself that hard, and wouldn't have a road-train to drag me along. So decided to make the route easier for an old man like me. Now I had a new itinerary, I would need to change my accommodation bookings. But that proved much more difficult than expected. It was not school holidays, nor was it high season for tourism. So I wondered why this was so. I ended up making several compromises which I was not looking forward to, but proved to be fun.

A few days out from my start, I had a tussle with a stand up paddleboard, it won and I tore my left bicep tendon. I did not know that at at the time. I wasn't about to go to the doctor to find out. Instead I rested for a day or two, then tried cycling. I could manage, so long as I didn't get out of the saddle and use my arms too much. That was good enough for me.

My trip started with a flight into Christchurch from Sydney on Friday March 4th 2016, and ended with a flight out of Queenstown on Sunday March 13th 2016. In between I had to travel with all my gear between those two places.

I'd fitted a 12-30 cassette on my bike as I was carrying a greater load and was going to do some climbing, and asked the local bike shop (Bike Addiction) to check the bike over for any obvious problems. They gave me a cardboard bike box and I packed my bike and all the gear into the box ready for take-off the next day.

Bike caged up ready for the flight.

Apart from needing help to lift the bike box, as my left arm was pretty useless. The job of getting the bike in the box to the airport was fairly easy. I was still a bit jet lagged from my UK trip, so leaving home at 4:30am was quite easy.